WASHINGTON, D.C., June 4, 2014 — Chief economist for the National Federation of Independent Business (NFIB) William C. Dunkelberg, issued the following statement on May’s job numbers, based on NFIB’s monthly economic survey that will be released on Tuesday, June 10, 2014. The survey was conducted in May and reflects the responses of 678 sampled NFIB members:

THIS REPORT COMPARES MAY FINDINGS TO APRIL FIGURES.

“Fifty-five percent of the owners hired or tried to hire in the last three months and 46 percent reported few or no qualified applicants for open positions.  GDP declined in the first quarter, so one would expect reduced labor demand.  However, this did not occur.

“Twenty-four percent of all owners reported job openings they could not fill in the current period (unchanged), providing some downward pressure on the unemployment rate. Fourteen percent reported using temporary workers, unchanged for several months.

“Job creation plans continued to strengthen and rose 2 percentage points to a seasonally adjusted net 10 percent, approaching “normal” levels for a growing economy, even with no growth last quarter.

“Weak GDP numbers apparently did not dampen labor demand a whole lot, with net gains in jobs posting an eight month run.  Job openings (not able to fill) remained at the highest level in the expansion and plans to create new jobs gained more strength.  Although owners reporting job openings are 10 points below the record high, it is holding at the highest level seen since mid-2007, suggesting that labor markets might be tighter than the unemployment rate suggests.” 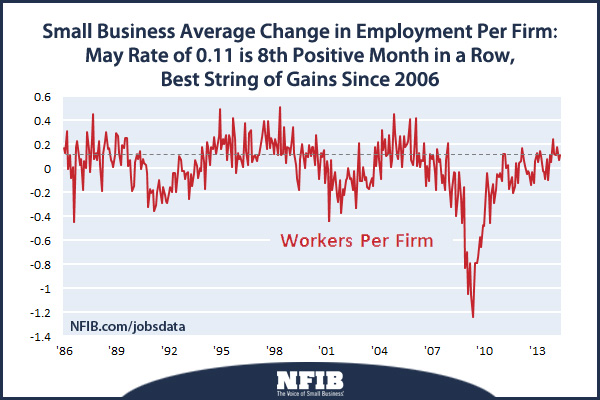 Commemorating its 70th anniversary, the National Federation of Independent Business is the nation’s leading small-business association, with offices in Washington, D.C., and all 50 state capitals. Founded in 1943 as a nonprofit, nonpartisan organization, NFIB gives small- and independent-business owners a voice in shaping the public policy issues that affect their business. NFIB’s powerful network of grassroots activists sends its views directly to state and federal lawmakers through our unique member-only ballot, thus playing a critical role in supporting America’s free enterprise system. NFIB’s mission is to promote and protect the right of our members to own, operate and grow their businesses. More information about NFIB is available at www.NFIB.com/newsroom.