“The only two index components that increased in June were labor market indicators: the percent of owners with job openings and the percent planning to create new jobs in the coming months. While reports of actual net job creation per firm were positive, consumer and business owner optimism remain low, with both spending growth and sales expectations weak.  This means there are more jobs but not much more output,” said NFIB chief economist Bill Dunkelberg. “With election day months away and no sign of change in Washington, economic growth for the rest of the year will continue to be sub-par.  The unemployment rate will fall more due to people leaving the labor force than to jobs being created and fewer hands making GDP.”

A review of the June indicators is as follows:

•    Labor Markets.  NFIB owners increased employment by an average of 0.05 workers per firm in June (seasonally adjusted), the ninth positive month in a row and the best string of gains since 2006.  Seasonally adjusted, 12 percent of the owners (up 1 point) reported adding an average of 3.3 workers per firm over the past few months.  The remaining 75 percent of owners made no net change in employment.  Fifty-three percent of the owners hired or tried to hire in the last three months and 43 percent (81 percent of those trying to hire or hiring) reported few or no qualified applicants for open positions.

•   Job Creation. Job creation plans continued to strengthen and rose 2 percentage points to a seasonally adjusted net 12 percent, approaching  “normal” levels for a growing economy (even with no growth last quarter) and the best reading since 2007.  Not seasonally adjusted, 18 percent plan to increase employment at their firm (down 3 points), and 5 percent plan reductions.

•    Sales.  The net percent of all owners (seasonally adjusted) reporting higher nominal sales in the past 3 months compared to the prior 3 months fell 1 point to a net negative 2 percent.  This is among the best seasonally adjusted readings since early 2012 when the economy temporarily reached a more normal growth rate.  Thirteen percent cite weak sales as their top business problem, one of the lowest readings since December 2007, the peak of the expansion.

•    Earnings and Wages. Earnings trends deteriorated 1 point to a net negative 18 percent (net percent reporting quarter to quarter earnings trending higher or lower), still one of the best readings since 2007.   Rising labor costs are keeping pressure on earnings, but there appears to be an improvement in profit trends in place, even if not historically strong.  This is one of the best readings since mid-2007 with the exception of a few months in early 2012 when the economy posted decent growth rates for several quarters.

•    Credit Markets. Six percent of the owners reported that all their credit needs were not met, up 1 point and 2 points above the record low.  Twenty-seven percent reported all credit needs met, and a record 54 percent explicitly said they did not want a loan (67 percent including those who did not answer the question, presumably uninterested in borrowing as well).  Only 3 percent reported that financing was their top business problem compared to 22 percent citing taxes, 20 percent citing regulations and red tape and 13 percent citing weak sales.

•    Inventories. The pace of inventory reduction was steady, with a net negative 4 percent of all owners reporting growth in inventories (seasonally adjusted).    The net percent of owners viewing current inventory stocks as “too low” was unchanged at a net negative 2 percent, still a “lean” reading. Sales trends deteriorated a bit but remained at the best levels in the recovery, just historically weak.  Expected real sales weakened as well, and this contributed to less urgency to rebuild stocks.  The net percent of owners planning to add to inventory stocks fell 2 points to a net negative 1 percent.  While inventories have been building solidly at the national level (a car inventory bubble), it appears that the small business sector is adding only a little to the accumulation of stocks reported in the GDP accounts and sales are too weak to produce much liquidation.

Twenty-two percent plan on raising average prices in the next few months (unchanged).  Only 3 percent plan reductions (up 1 point), far fewer than actually reported reductions in past prices. Seasonally adjusted, a net 21 percent plan price hikes (unchanged and the fourth highest level since 2008).  If successful, the economy will see a bit more “inflation” as the price indices seem to be suggesting. 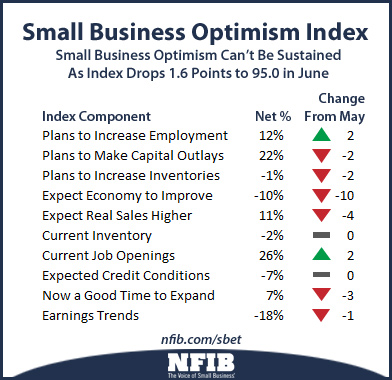 Today’s report is based on the responses of 672 randomly sampled small businesses in NFIB’s membership, surveyed throughout the month of June. Download the complete study at http://www.nfib.com/sbetindex.
*All net percentages seasonally adjusted unless otherwise noted. The net percentage is the percent with a favorable response less the percent of owners with an unfavorable response.