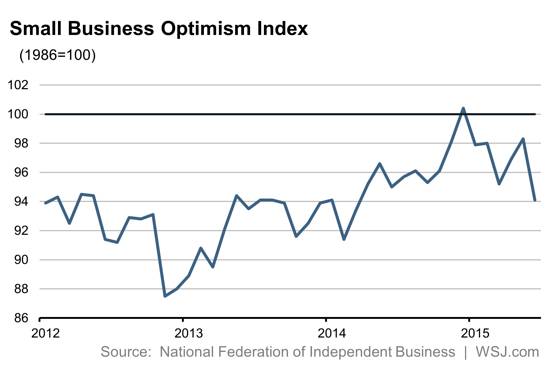 Small-business owners turned much less confident about their economic situation in June, according to a report released Tuesday. The dark mood was evident at businesses in both shale and nonshale states.

The National Federation of Independent Business’s small-business optimism index unexpectedly fell to 94.1 in June from 98.3 in May. Economists surveyed by The Wall Street Journal projected the index to be little changed in June at 98.4.

“It’s not a recession signal, but a clear sign that economic growth on Main Street is not set for a strong second half of growth,” the report said.

None of the 10 subindexes increased in June: nine declined and one was unchanged.

The NFIB also found that the net percentage of owners reporting higher nominal sales in the past three months compared with the prior three months fell 9 points to a net minus 6%.

Given the pessimism, it is no surprise that small firms rethought expansion plans last month. The subindex covering planned hiring fell three percentage points to 9%, and the capital spending plan subindex fell two points to 23% in June.

Earlier in July, the NFIB reported, on balance, small companies added a net minus 0.01 worker per firm in June, “essentially zero.” The weak labor data suggest the unemployment rate will edge up in the second half, the trade group’s report said.

The recent uptrend in selling prices hit a setback in June. The net percent of small-business owners that raised selling prices was 5% in June, down one point. “There are no signs of inflation bubbling up on Main Street,” the report added.

In a special section, the NFIB looked at responses broken down by whether the business was located in a state where shale mining takes place or not. Overall, shale-state firms were a bit more downbeat. However, the shale effect couldn’t explain more than 1.1 points of the 4.2-point fall in the June index, the NFIB concluded.