WASHINGTON, March 11, 2014- Small business optimism continues its winter hibernation with the latest Index dropping 2.7 points to 91.4, a reading that historically has been associated with recessions and periods of sub-par growth. The one highlight in the January survey, a surge in hiring plans, was crushed in February by the continued onslaught of a wintry recovery now in its 5th year.

“Uncertainty is a major cause of the Index’s dip. Lacking any progress in Washington and facing continued unknowns with the healthcare law, the EPA, the minimum wage, tax reform and more, it is no surprise that the Small Business Optimism Index fell, reversing a few months of modest gains,” said NFIB chief economist Bill Dunkelberg. “As long as uncertainty remains high, owners will remain cautious when it comes to increasing inventory. Business owners aren’t going to bet their money on a future they cannot see clearly.”

The February report on net new jobs was better than expected, but inadequate to the task of reducing the unemployment rate which rose a tenth of a point.  As disturbing as the decline in job creation plans was, the plunge in expectations for improvements in real sales in the coming months and for business conditions 6 months from now, show that we shouldn’t expect blue skies soon.” 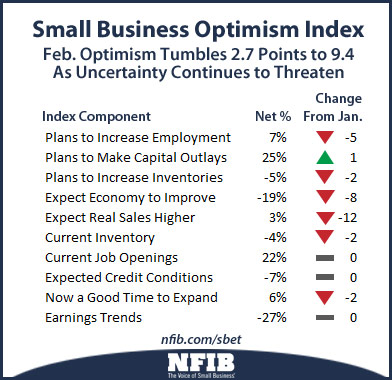 A review of the February indicators is as follows:

The remaining 78 percent of owners made no net change in employment.  Forty-seven percent of the owners hired or tried to hire in the last three months and 40 percent (85 percent of those trying to hire or hiring) reported few or no qualified applicants for open positions.

•    Job Creation. Twenty-two percent of all owners reported job openings they could not fill in the current period (unchanged).  This suggests that the unemployment rate did not change much in February.  Thirteen percent reported using temporary workers, down one point from January. Job creation plans gave up January’s welcome gain, falling 5 points to a seasonally adjusted net 7 percent.  Not seasonally adjusted, 17 percent plan to increase employment at their firm (down 1 point), and 4 percent plan reductions (down 1 point).

•    Sales. The net percent of all owners (seasonally adjusted) reporting higher nominal sales in the past 3 months compared to the prior 3 months improved 2 points to a net negative 8 percent, typical of the 2013 experience.  Sixteen percent cite weak sales as their top business problem, still above levels experienced in “normal” times.  Seasonally unadjusted, 21 percent of all owners reported higher sales (up 1 point)  and 34 percent reported lower sales (unchanged), not a very strong report.

•    Earnings and Wages. Earnings trends were stable at a miserable net negative 27 percent (net percent reporting quarter to quarter earnings trending higher or lower).   Pressure from labor costs that can’t be passed on are keeping pressure on earnings gains.

•    Capital Outlays. The percent of owners planning capital outlays in the next 3 to 6 months rose 1 point to 25 percent. Fifty-seven percent reported outlays, down 2 points from January and typical of reports in recent months. The expiration of expensing allowances temporarily boosted spending in December but now readings are back to normal levels of the last year.   Overall, this is not an outlook conducive to more capital spending and expansion.

•    However, stocks are still considered excessive in spite of this long period of net reductions.  The net percent of owners viewing current stocks as “too low” deteriorated 2 points to a net negative 4 percent.  This is due primarily to a large deterioration in sales expectations.   Consequently, the net percent of owners planning to add to inventory stocks fell 2 points to a net negative 5 percent indicating little appetite to add to stocks in the current environment.

•    Inflation.  Fifteen percent of the NFIB owners reported reducing their average selling prices in the past 3 months (up 2 points), and 19 percent reported price increases (up 2 points).  Seasonally adjusted, the net percent of owners raising selling prices was a net 1 percent, down point.  Overall, there is little evidence that firms are able to raise prices much. Seasonally adjusted, a net 23 percent plan price hikes (up 4 points), a long way from the net 1 percent reporting higher actual prices in recent months.  “Wishes” for higher prices are not granted in an economy with a lot of excess capacity.

Today’s report is based on the responses of 792 randomly sampled small businesses in NFIB’s membership, surveyed throughout the month of February. Download the complete study at http://www.nfib.com/sbetindex.

NFIB’s Small Business Economic Trends is a monthly survey of small-business owners’ plans and opinions. Decision makers at the federal, state and local levels actively monitor these reports, ensuring that the voice of small business is heard. The NFIB Research Foundation conducts some of the most comprehensive research of small-business issues in the nation. The National Federation of Independent Business is the nation’s leading small-business association. A nonprofit, nonpartisan organization founded in 1943, NFIB represents the consensus views of its members in Washington, D.C., and all 50 state capitals.